Richard Neale Richard has 10 years’ experience as a geoscientist within the Oil and Gas Industry. He currently works as a senior geologist in Cegal with his expertise within quantitative interpretation (QI), using these techniques to better understand reservoirs and their fluids. He also has experience working as a production geologist, planning and following up the execution of well operations.
07/16/2019 |

In 2014, Oranje-Nassau Energie (ONE), a private Dutch E&P company and operator of the Gillian Unit joint venture, located in Block L11c offshore Netherlands, enlisted the help of Cegal to help rank a number of potential near-field prospects using different technologies and techniques.

Cegal received a substantial amount of reprocessed, and depth migrated seismic data, comprising time and depth volumes as well as multiple offset AVO stacks. The challenge was to harvest this data and extract the maximum relevant information for these volumes, in combination with sparse information from the available well logs.

Cegal applied a variety of quantitative interpretation techniques using their tool, Blueback Seismic Reservoir Characterization (SRC), with the goal of extracting as much from the data as possible, more so than ONE could with conventional techniques.

An initial screening phase using AVO and Extended Elastic Impedance (EEI) with Colored Inversion was performed on the full list of prospects provided and eventually narrowed down to one prospect which showed most potential, the Gillian prospect.

Gillian and the Kiwi Problem

The key risk for Gillian was the trapping nature of the prospect, and specifically the sealing nature of the fault which defined the southern extent of the prospect. This fault was named the Kiwi fault. The reason for this requirement was that in 1978 a previous operator of the block had drilled a well into the adjacent (to the south) fault block, which was located up-dip of Gillian. Hence, the Kiwi fault had to be sealing to effectively trap gas in Gillian. 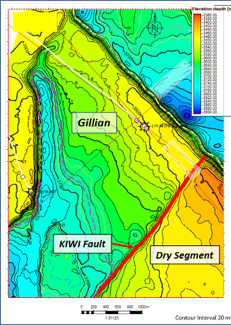 ONE carried out a detailed set of approaches in order to de-risk the sealing nature of Kiwi: 1) Detailed amplitude mapping, 2) Structural modeling, and 3) AVO classification and rock physics modeling (conducted by Cegal). The observations made within Gillian, coupled with the findings by

Cegal, strengthened the decision to drill it first in the upcoming drilling campaign in mid-2015. The main observations from Cegal were primarily a bright and laterally consistent (with structure) Class II and III AVO anomaly that had conformance with structure. This response was not observed in the up-dip (dry) block, and hence corroborated the overall understanding of the area and the validity of the prospect.

The Moment of Truth

ONE drilled the L11-14 exploration well targeting the Gillian prospect in 2015. The well encountered gas-bearing reservoir sandstones, which was consistent with the AVO and amplitude work carried out by Cegal.

“Cegal’s contribution has been of great help. Your work de-risked the prospect significantly and gave us confidence to proceed with the well,” says R. Gras, Principal Geoscientist in ONE.

This case shows how a combination of conventional interpretation using high-quality reprocessed 3D seismic, combined with structural modeling, seismic reservoir characterization, and rock physics was deployed in order to do de-risk a gas prospect.

The subsequent drilling by well L11-14, finding gas with virgin pressure, demonstrated the overall validity of the pre-drill evaluation.